France is still the number one tourist destination in the world according to the UNWTO (World Tourism Organization) statistics. The US has fallen third, and Spain has claimed the position of the second most visited country. At the continental level, the growth of visitors is the greatest in Europe, even though it already is the biggest tourist destination. 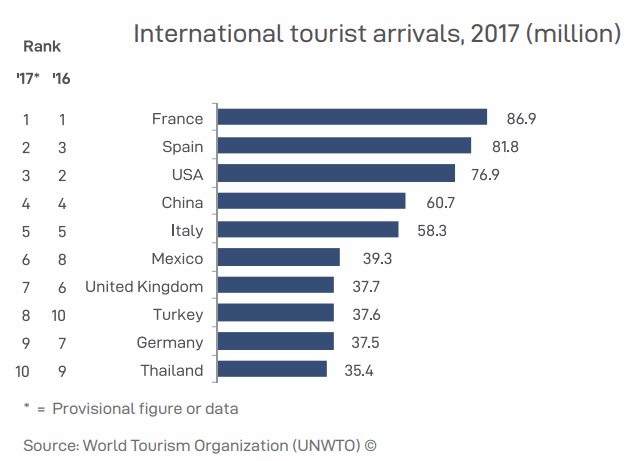 Top 10 most visited countries in the world in 2017 according to UNWTO:

If you want to travel in 5 out of 10 most visited countries in the world relatively easily in a manner that doesn’t take too much time, here is our tip. France and Spain share a long border along the Pyrenees Mountains. Italy has a border with France. Germany is the northeast neighbor of France. The large island where England, Scotland and Wales are located is separated from France by a short train ride or ferry trip.

The best way to tour these countries is to do a road trip, or to get an Eurail pass or an Interrail pass for traveling Europe by train.

Top 11-20 most visited countries in the world are:

Don’t leave on a trip without a guidebook. Riviera (Cote d’Azur) in France is the must-see destination in addition to Paris. Most travelers want to see the Mediterranean coast of Spain where the city of contrasts, Valencia, has both its long history and ultramodern contemporary architecture on display. The hot trending travel destination Portugal has its own sunny coast in the south in Algarve.