Tablets became an instant hit product category in 2010, when the original Apple iPad was introduced. Five years, and several iPad models later, Apple has decided to make the iPad bigger. The iPad Pro has a 12.9- inch display which promotes the tablet into the same size category where laptops such as the MacBook and Macbook Air already are.

The starting price for the iPad Pro is $799 (models with higher specs are $949 and $1079), making it a bit cheaper than the MacBook or Macbook Air. As the name implies, the iPad Pro is targeted to professional use: enterprises, entrepreneurs and artists.

If you want to use the iPad Pro as an ereader, you can load your EPUB and PDF ebooks to the included iBooks app. The large screen is well suited for reading PDF-books and documents. Also fixed layout multimedia books created in iBooks Author shine on the large high-resolution display.

Because of its price, using the iPad Pro solely for reading and web surfing, however, may not justify the investment. 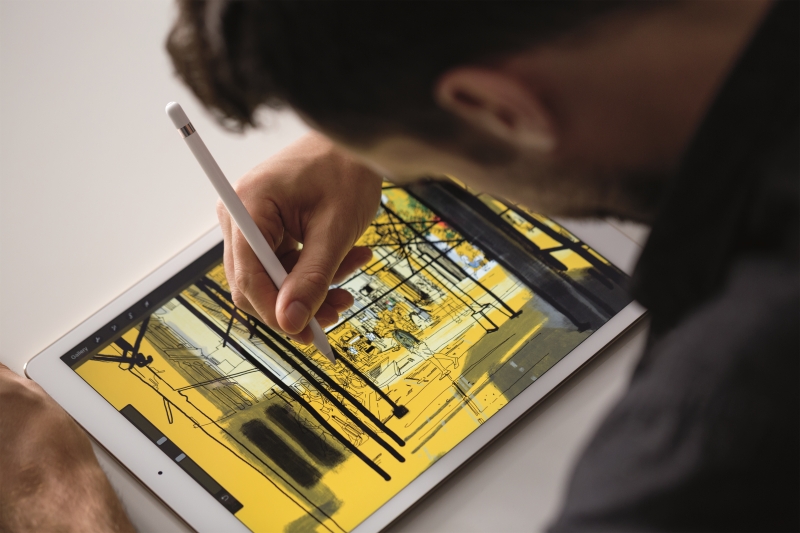 Authors, artists and graphic designers may find a stylus that Apple has developed specifically for the iPad useful. It is called the Pencil, and its price is $99. A reason for the high price of the Apple stylus is that it comes with embedded electronics. The Pencil can sense the angle how it is held in the hand and the pressure it is pushed against the screen, and the tablet app behaves accordingly.

iBooks Author is not on the list of applications that are available for the iPad Pro. iBooks Author is an application that runs on Mac computers (OS X). It is used for creating fixed layout multimedia ebooks, such as books about movies or travel guides.

A similar product with Apple’s large tablet is Microsoft Surface Pro. It has a 12-inch display, and a stylus is included in the product package. Incidentally, the Surface Pro prices start at $799. Microsoft introduced a soft case that doubles as a decent keyboard for the tablet already two years ago.

View a hands-on video of the iPad Pro where you can see the keyboard case and pencil as well: