Our travel guidebook author has explored the ins and outs of the city of Valencia in Spain, and this is his conclusion: Valencia is a city of contrasts, an exciting destination even for travelers who think they have seen it all. The ancient city center with majestic buildings and ancient shops and bars is simply remarkable. A fifteen minute walk away from the old town, the ultra-modern City of Arts and Sciences drops the jaw of any globetrotter. These are the five top sights in the historical city center of Valencia in Spain.

The top 5 sights have been extracted from the travel guidebook Valencia, Spain – The Key Sights, Places and Events (published in Klaava Travel Guide book series). The text has been edited for this blog post. 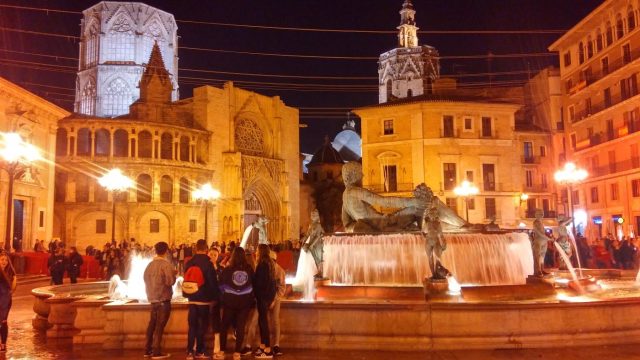 Plaza de la Virgen is a home for a number of key buildings in the city. It is not a coincidence, because the plaza is the former center of the city. The town hall used to stand at the west side of the plaza. During the Roman era, the square was a Roman Forum, a central place in the city.

The key historical buildings around the square are:

Basilica Virgen de los Desamparados
Cathedral
Palau de la Generalitat
The fountain at the square is a new work of art, revealed in 1976.

Plaza de la Virgen is a meeting place for Valencians, a central place for many fiestas and one of the sights that attracts plenty of tourists who like to snap selfies in front of the fountain. 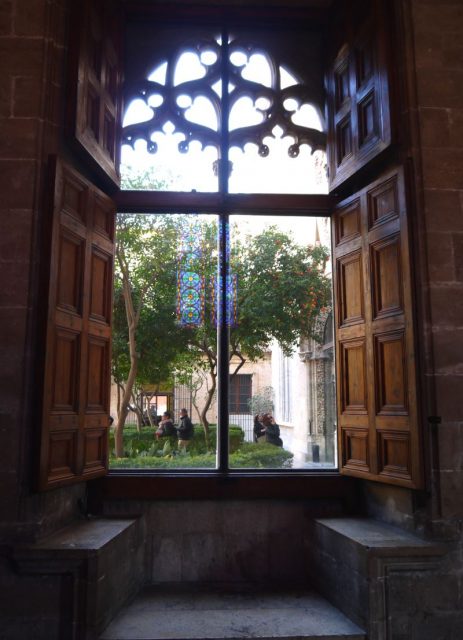 The original purpose of La Lonja building (opened in 1533) was trading. It may not sound like an exciting, soul-stirring experience, but judge after you have seen it yourself. Nevertheless, La Lonja was built for merchants who arrived in Valencia to negotiate about silk produced in the region. The city wanted to impress merchants, and invested in the architecture of the building.

Pere Compte and Joan Ibarra were the architects who conducted the work for 50 years. Today, La Lonja is a Unesco World Heritage site.

Barrio del Carmen is the oldest district of Valencia where many buildings are so old that they can’t stand straight anymore. This part of the city used to stand on an island in Turia River. As the city expanded south, the south side of the island was connected to the mainland. The entire river was diverted away from the city center in 1956.

The Carmen neighborhood shows its age in many ways. Houses are small, many of them are worn down, and alleys are more narrow than in other parts of the city. Near Plaza del Tossal, a number of restaurants and bars keep the nearby streets busy all day and night.

The buildings around the Town Hall Square are big, tall and decorated around the largest square in central Valencia.

It wasn’t always like that. Until late 19th century, Convento de San Francisco, a monastery, covered the space that is today the Town Hall Square. The city wanted to move the town hall to a more spacious place away from Plaza de la Virgen, and when the monastery couldn’t maintain its property anymore, it was demolished. The new central square of Valencia was established, and the Town Hall moved to a large school building overlooking the plaza.

Facades of many other beautiful buildings line the square, like

Plaza de Ayuntamiento is also a central place of many big fiesta events, such as Fallas.

Torres de Serranos: medieval towers and gate to the city 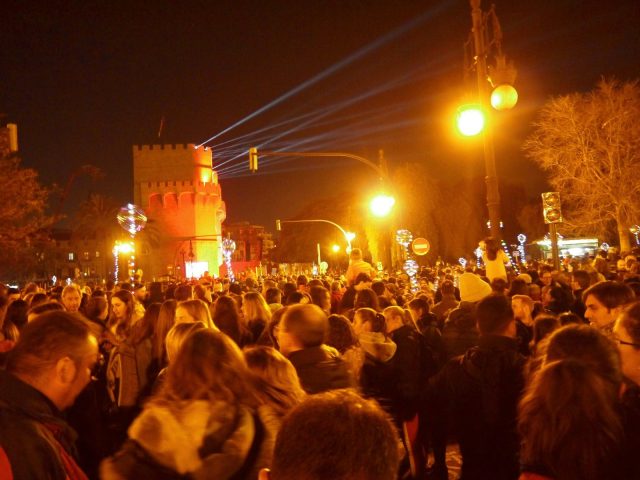 Valencia has had fortified walls around it three times during its long history. Only two gates have survived the third wall: Torres de Serranos and Torres de Quart. In addition to being watchtowers, they are also gates where entrance to the city was controlled.

For tourists, Torres de Serranos is the primary destination because it is located near Plaza de la Virgen and the Cathedral.
The massive towers were built in 1392-1398. It is possible to ascend to the tower to see the city from a bird’s view, but even taller towers that let you see over the roofs of the city are, for instance, in Santa Catalina Church and in the Ateneo building. 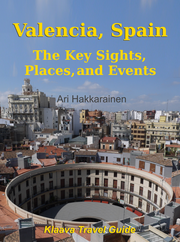