A Concise History of Finland – the 11th to the 21st Century 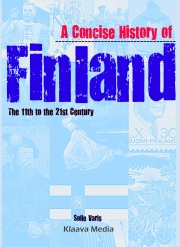 UNAVAILABLE at the moment.

In 2017, Finland will celebrate its 100th Independence Day. It has been a long and turbulent path to prosperity for this Northern European nation, but today, Finland is a stable democracy. This book outlines the key historical events that created the nation. The story of Finland starts from the early Middle Ages, and takes readers to the new challenges set by globalization.

Geographically located between East and West, Finland has been influenced and ruled by both cultures. The King of Sweden ruled Finland until the early 19th century, when he lost the scarcely inhabited territory to the Czar of Russia. 100 years ago, when the last Czar was dethroned, Finland seized the moment, and became a sovereign state. It, however, meant the beginning of a civil war. Later, Finns fought for their independence in the Second World War.

History isn’t about wars alone. The book describes how international relationships and a strong president can define a nation for decades. The concept of Finlandization can still be a touchy subject for Finns, but it is an elemental part of the nation’s history.

Today, Finland is the home of some 5.4 million people, millions of Angry Birds, rock group Nightwish and Nokia. Finland is also renowned for its high rankings in global school system comparisons and for its economical competitiveness.

A Concise History of Finland starts from 1000-year old events, but the focus of the book is on the 19th and 20th centuries. The book is a perfect guide to Finland’s past for travelers, students, business people, media, and everyone interested in history.

1. The Era of Swedish Rule
2. Finland as a Pawn in Superpower Politics
Autonomy
Life in the Grand Duchy
3. The Rise of the Finnish Identity and National Awakening
National Awakening
Central Figures
4. The Turning Point in the Society and the Economy
The Reforms in the 1860s
Fennomans, Svekomans, and Liberals
Heading towards the Civil Society
Economy
The Changing Society
The First Period of Oppression (1899 – 1905)
Attitudes toward Russification
Parliament Reform in 1906
The Second Period of Oppression (1908 – 1917)
Jaeger Movement
5. Finland’s Independence Movement
Independent Finland
The 1918 Civil War in Finland
Brief and Bloody Civil War
The Fight for a Constitution
German King
6. From Dichotomy to Unification
Young Republic
The Improving Standard of Living
Art as a Consumer Good
The Power of Entertainment
Left and Right Wing Radicalism
Expand Finland, Liberate Viena
Lapua Movement
Foreign Policy in the 1920s and 1930s
7. Finland in the Second World War
Towards the Winter War
105 Days of Fighting
Cease-fire Period
Continuation War
Withdrawal from the War
“The Years of Danger”
The Rise of the Left Wing
YYA Treaty 1948
Comprehensive War Reparations
Reconstruction
8. Building Up the Welfare State
Detent
Frozen Nights
Note Crisis
Fight for Neutrality
Trade Policy
Finlandization
Structural Change
Cultural Shift
9. Finland’s New International Role
After Kekkonen’s Period
From Soviet Union to Russia
European Union
Economic Recession in the 1990s
Finland and Globalization

One thought on “A Concise History of Finland”