The Art of Scientific Discovery – Creativity, Giftedness and the Nobel Laureates 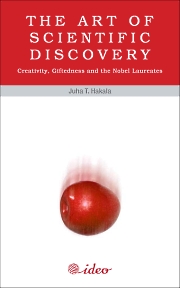 The book describes the scientific discovery and the nature of creative work. The creative process is covered specifically as experienced by researchers. The author’s correspondence with almost 40 Nobel Prize winners provides unique material for the book. The Nobel Prize winners describe their creative processes, ways of working and the birth of their most important scientific inventions.

The book will also look at the history of intelligence and creativity research. What is creative talent? The different ways of valuing creativity and scientific productivity are critically assessed. Are they reliable? Examples include the peaks of science from the mathematician Ramanujan to Einstein and the other major discoverers of the 20th century.

The Art of Scientific Discovery is available on the following bookstores:

Amazon.com
Amazon.co.uk
Amazon.ca
Amazon.de
and on other Amazon Kindle stores across the world.