The selection for the top 5 sights varies from old towns and fortresses to natural wonders. There is no Eiffel Tower nor Colosseum in Algarve, but there are magnificent historical places that tell ancient stories of people and natural landscapes that have developed during millions of years. Without a doubt, they are guaranteed to impress visitors.

Castro Marim is an ancient fortress town next to the Spanish border near the sea. It has been such an important location for the defense of the region that the small settlement has not only one fortified castle, but two fortresses standing on adjacent hills.

The very first castle, simply known as the Old Castle, is inside the walls of a larger fortress structure. The Old Castle was built by the Moors. The construction of the larger castle around it was ordered by King D. Afonso III in the 13th century. The castle is in a strategic position in relation to North Africa and Iberian Peninsula, and it has been a field of many battles between Muslims and Christians. In 1242, the Christians managed to take over the region and have since kept control.

In 1319, King D. Dini started further fortification work on the castle. He named the castle as the central place for the Order of Christ, an organization similar to the Order of Templars. When the Era of Discoveries started, Castro Marim was an important base for many of the sea voyages. For instance, Henry the Navigator lived in the castle. In 1641, Saint Sebastian’s Fortress was built and connected to the old castle with a wall.

Large parts of the Old Castle are in ruins, but there are enough walls and remnants of buildings for visitors to imagine how the place was. In addition to the colorful history, the views from the top of the wall are splendid. The castle is open every day from 9 am until 7 pm during the summer season and until 5 pm during winter. A large carpark in the village center just below the fortresses welcomes visitors. Castro Marim is a tiny village where a grocery store and a few cafés provide food and drink.

The highway A22 takes you directly to Castro Marim which is the last junction before a bridge crossing the river to Spain. An alternative route to Castro Marim is the N125 that follows the coastline, passing through villages and towns. 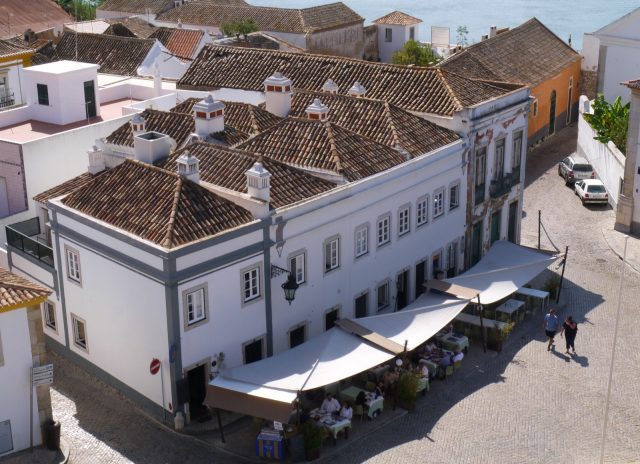 Faro is the administrative capital of Algarve and the largest town of the province with 65,000 inhabitants. It may not be a key tourist destination, but the old town of Faro is remarkable and definitely worth a visit. It is easily explored on foot in a couple of hours. The old town features a fishing port, walls that used to protect the community, a big cathedral, beautiful old administration buildings, narrow pedestrian (shopping) streets, and plenty of local and foreign people bringing a lively buzz to the old town.

The first signs of settlements in the Faro area date from the 4th century B.C. Romans, Visigoths, and Arabs ruled the town. The area was known as Ossónoba until the 9th century. Between the 9th and 11th centuries, the town was protected by walls. Faro became a prosperous community because of its port, salt production, and trade. In 1596, English troops pillaged the town, damaging its walls, churches, and other buildings. The worst was yet come; in 1755, a devastating earthquake ruined all the main buildings of the town.

Sections of the wall have been restored as well as other buildings. Faro is located on a flat terrain, but there is a place in the old town where you can have a view over the buildings to the sea. Pay the entrance fee to the old and beautiful Se Cathedral and ascend the narrow stairs to the bell tower.

If you arrive in Faro by car, a large car park on the eastern side of the old town is free (well, freelance parking attendants manage customer service and appreciate a tip). Type your destination, for instance Rua da Policia de Seguranca Pública into your navigator, and take care in the traffic. All streets near the old town are one way only.

The peninsula is a fascinating place to admire the views to the sea, to discover tiny coves between vertical cliffs, and to gaze at other towns of Algarve in the horizon. Portimao, Alvor, and Luz are easily visible without binoculars. Paths on the top of the hill are safe, but warning signs asking people to avoid certain sections or going too close to the edge are there for a purpose. The shores are under constant, gradual change as the sea carves new caves into rocks, and cliff tops collapse into the sea.

If you are driving, you have to find your way to the street Estrada da Ponta da Piedade. You can not turn onto the road directly from the main road N125; you have to divert via a roundabout. Once you have found the right street, keep driving until houses don’t block the views anymore, and the landscape opens up with views to the sea.

Return to the book description      Next sample ->